When I interview German model Vanessa Breuer she is in a New York hotel room, following a week working in Paris, lamenting the fact that she’s currently away from her beautiful family, husband Oddy, and two little girls Luca and Evie. “My heart aches thinking about the moments I miss out [on],” she says. “But at least my husband is at home, and when I come back and see the life we are living it feels like I am doing the right thing.”

And what a life it is. The family’s home sits atop a mountain hideaway in Ibiza, isolated enough for the four to enjoy themselves, and each other, without interruption. “We spend a lot of time outdoors, in our garden or on the beach. There is no pressure there to be a certain way, it doesn’t matter what you wear. My kids are naked a lot of times and ‘free’.” 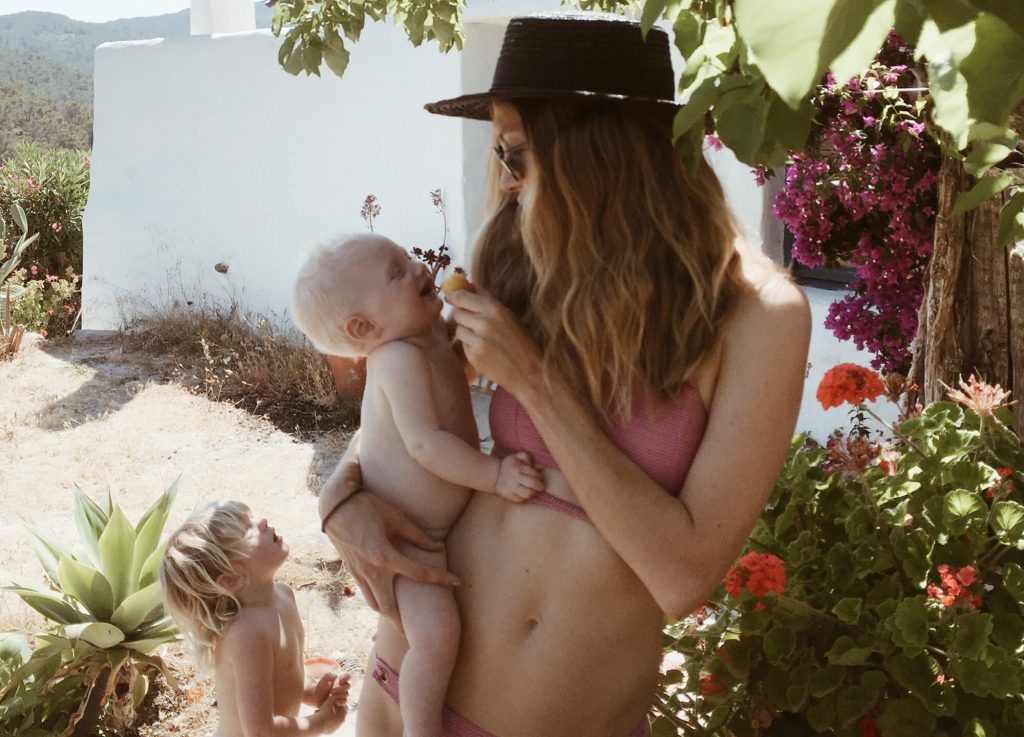 The only downside to this bohemian existence? The travel. With Breuer’s modelling jobs taking her from this idyllic lifestyle – a one-day shoot can mean two to three days away for Breuer. On the flip side, her ability to make more money in a day than your average working mum means Oddy is able to stay at home, taking care of their two girls fulltime. And Breuer is in awe. “My husband inspires me. He is doing such an amazing job, so selfless, so patient with our children,” says Breuer. “I am so thankful to have Oddy in my life.”

Breuer grew up in Germany in a small town near Cologne, with a stay-at-home mum and a father whose presence in her life was limited. “Honestly I don’t have too many fond memories of growing up, I always felt like I was born into the wrong place and time and with the wrong parents.” 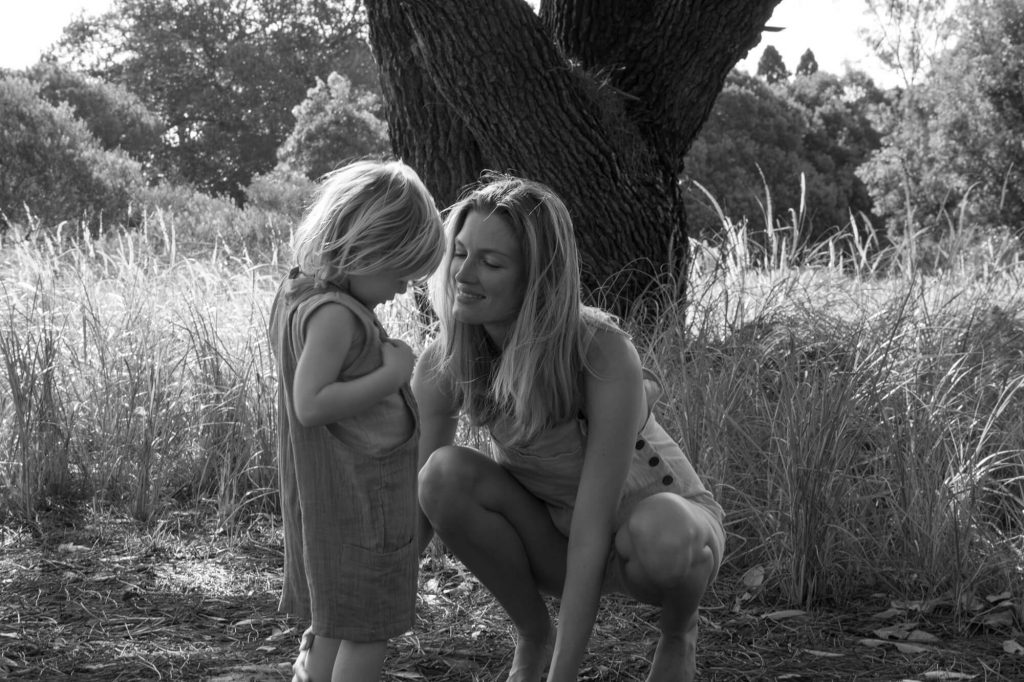 Determined to make it on her own, Breuer began working at age 11, cleaning offices and later at a flower shop, before being discovered on the street by a modelling agent at 14. “It happened quickly for me. I made as much money in one day of modelling then in one year of cleaning.”

Disinterested in fashion or magazines, the appeal of the modelling industry had little to do with clothes, and everything to do with independence and travel. “I lived all over the world and enjoyed working a lot.” But soon life on the road became a lonely affair with the unpredictable nature of bookings and fast-paced lifestyle often taking its toll on Breuer. “There are lots of castings where you don’t end up getting the job, lonely hotel rooms, new people to work with all the time, different cultures and pressure to fit in clothes.”

In 2006, Breuer and her husband decided they were ready for a new chapter, packing up and heading for California, where she began Culinary School in the hopes of becoming a personal chef. During her second class, she fainted, arousing the suspicions of her new teacher. Turns out, she was pregnant. “It was a great time in our lives. We were away from most of our friends and rented this cute little house so I was just going to culinary school and we experienced the pregnancy ‘together’.” The couple spent their downtime cooking, testing recipes and sunbaking in the backyard. Unexpectedly, US health insurance requirements prompted the couple to relocate to Sydney later in the pregnancy, where she had an intense but natural water birth. “My body felt like a total mess, but the hormone cocktail is so amazing, I didn’t really care too much at the time. I loved being at home and my man took amazing care of me.”

During those early days of motherhood, Breuer’s career was the furthest thing from her mind. But after just two weeks, she was cast for a maternity photoshoot, which took place in her apartment. “They came to me so I could feed my baby and took pictures of me in maternity underwear – it felt a bit weird at first, but then so good as my body bounced right back and I finally had some boobs!”

Two weeks later, the brunette beauty was booked for a major Australian television commercial. “I couldn’t believe it. With her husband by her side during the shoot, she was able to breastfeed Luca. “After that I had more requests and Oddy ended up quitting his job as a carpenter and became a full time stay-at-home dad.” When Breuer fell pregnant the second time, the family of three had moved to Ibiza. And this time around, the pregnancy was relatively easier with little Evie being born at 39 weeks. “She was born in my house four hours after my first contraction,” remembers Breuer.

The sought-after model has been in high demand ever since, but these days Breuer makes her career work for her. “My career is not important for me anymore,” she admits. “But my job provides us with the money to do that we really want to do so I am very thankful to be in this position.”

For this sun kissed mama, motherhood has brought a sense of peace and contentment, a welcome feeling after a childhood spent searching for her purpose. “I have no urge to ‘discover’ myself and to look for the meaning of life, I feel complete and happy. I would love to have more children, but for now we have our hands full.” 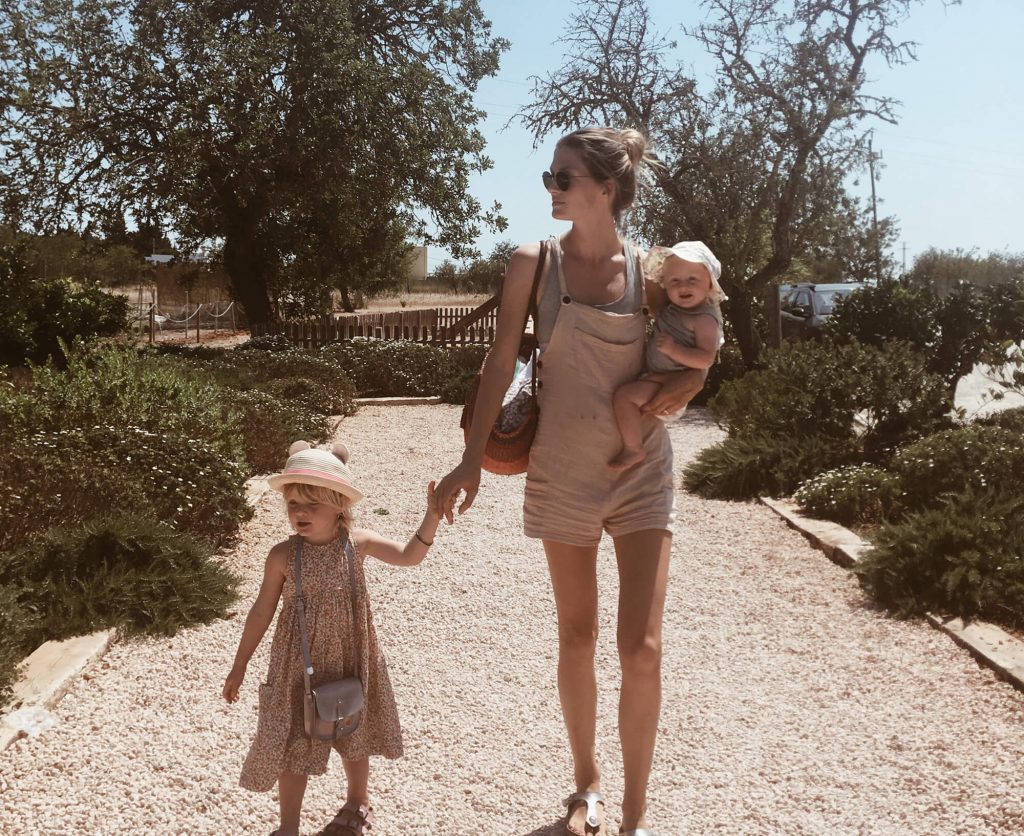 Vanessa’s Tips While Travelling with the Fam

Pack a lot of healthy snacks for the kids and yourself such as veggie sticks, nuts and fruit. So easy to have for on-the-go mamas.

Try not to pack too much, especially for carry-on luggage – your shoulders and back will thank you!

Use colloidal silver spray while travelling, we spray it around our faces so we don’t get sick. It is antibacterial and antiviral.

Take some extra health-boosting supplements such as B vitamin complex during times of stress.

Stretch when you can, even on the plane. If possible, take a walk up and down the aisle with baby in tow.

Pack some spare clothes for yourself, at least a T-shirt, in case of food spills. It helps to be prepared for the unexpected.

Try to stay calm during travelling, panic and stress will not help the situation or yourself!

The must-have item for grandparents #gamechanger

How to survive a mama off day